The death of Blair Peach and the Southall riot

Posted on November 18, 2017 by The Thatcher Crisis Years Leave a comment

In 1979, the Labour prime minister James Callaghan called a general election after dithering for months. The extreme right National Front hoped this would be their breakthrough and organised a provocative rally in Southall, an area of London that had seen the growth of a large Asian community. The result was a violent clash between fascists, anti-fascists and police resulting in the death of a teacher called Blair Peach. This is part of an account I wrote several years ago based on contemporary reports:

The National Front arrived as planned at around 7pm and wound up the crowd with some Nazi salutes from the Town Hall steps.  The party was required to admit members of the media but refused to allow the Daily Mirror in with an NF steward explaining “we are allowing in reporters from decent papers who are not black lovers”.

The NF’s youth organiser Joe Pearce surveyed the sit-in and declared the NF would “send back every single Asian out there”.  Rather more curiously, their parliamentary candidate John Fairhurst promised that if elected he would ‘bulldoze’ Southall to the ground and replace it with an ‘English hamlet’.

As the NF meeting got underway, a young teacher from New Zealand, an activist in the Anti-Nazi League, sustained a blow to the head from a weapon that left him staggering in to a nearby house.

The impression is sometimes given that Blair Peach died instantly in the street but in fact he was still conscious though very dazed and finding it hard to speak when the ambulance arrived a quarter of an hour after the injury.  There was no blood or external trauma but it’s clear that he was suffering from a swelling in the brain, what’s termed an extra-dural haematoma.

Blair Peach died in an operating theatre at the New Ealing District Hospital at 12.10am.  After his death, Met Police Commander John Cass was asked to investigate what had happened.  His full report was only made public three decades later.

A total of 31,000 man hours would be spent looking in to the circumstances of Blair Peach’s demise but not enough evidence was found to launch a prosecution.  However – Cass performed one action during his enquiry that leaked out at the time.

On 5th June, 1979, he ordered the lockers of SPG officers to be opened and searched.   In court, Cass revealed that he had discovered a range of irregular weapons. These included a sledge hammer, two jemmies, a three foot crowbar, a yard long piece of wood, a metal truncheon with a lead weight at the end and, what really excited the media, a “Rhino whip”.

There was no suggestion that any of these were used against Peach and Commander Cass was at pains to say that he could not prove that these items had been taken to Southall on the fateful day.

But thirty years later, the report by Cass clearly showed that he believed Peach had been killed by an officer in an SPG unit.  He was also convinced that certain officers had obstructed his investigations.

The police handling of the National Front meeting in Southall could have been so different, even by the standards of the late 1970s.  The newspapers at the time contrasted what happened there with a similar situation in Plymouth.  In that town, the NF meeting had been abandoned after Anti-Nazi League members filled the hall ahead of their arrival.

The Sun was unimpressed, seeing this as a breakdown in the police handling of the situation.  But it transpired that the Chief Constable in that part of Britain had taken the view that it was the NF that needed monitoring by the police with a view to bringing charges against them for stirring up racial hatred.

Posted on November 8, 2012 by The Thatcher Crisis Years Leave a comment

This is from 1980 – a year before the explosive riots of 1981, though the same year as the riot in St Paul’s, Bristol. There were lots of young unemployed people to tempt with a career in either the police or the army.

But there was equally some resistance to being part of the state machine, as it was then viewed. As for black youth, they either didn’t want to join (because of the SUS laws and pressure from within the community not to ‘sell out’) or the police just didn’t take them on.

Black police officers were a very rare sight at this time – and ethnic minority representation within the Metropolitan Police was at scandalously low levels. 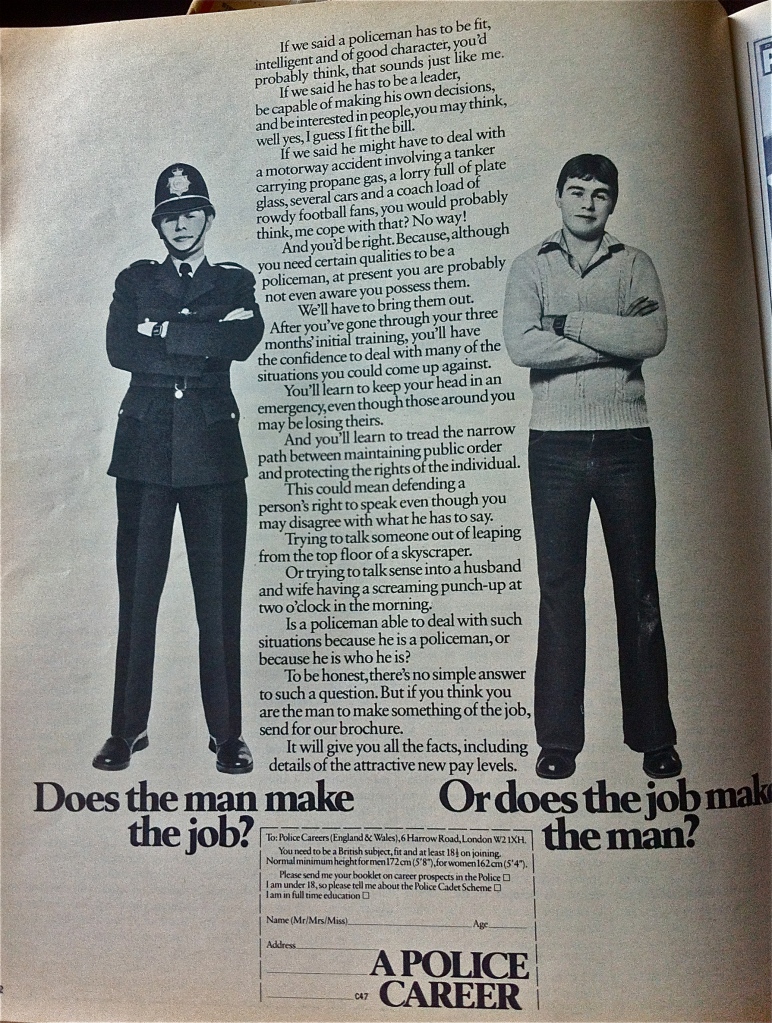 The Deptford Fire – months before the Brixton Riots

Posted on October 31, 2012 by The Thatcher Crisis Years Leave a comment

Thirteen young people died at a house fire in Deptford, south London on 18 January, 1981. They had been at a birthday party for Yvonne Ruddock, aged 16. Thirteen people died in the inferno including Yvonne and her brother.

Even by the standards of the time, this was a horrific incident. And I say that because house fires claiming lives often got surprisingly little media coverage. In this case, the tone of the media commentary and the attitude of the police played into an already existing sense of grievance among many black people in south London and beyond.

It’s reasonable to say now that this house fire set in train a series of events that would lead to the riots that convulsed cities across the UK in the spring and summer of that year.

A 2001 article in The Guardian details how the police focussed on the idea of something illegal going on at the party – or possible a fight between partygoers being the root cause. In contrast, many black activists believed the fire had been an arson attack with racist motives.

In a way, the cause was overshadowed by the reaction to the event. To many black youth, it seemed that the establishment revealed its indifference. For example, there was no statement of condolence from the prime minister Margaret Thatcher. Whereas now, a tragedy like Grenfell – and similar incidents – are treated with a far greater degree of sensitivity.

Local anger resulted in a Black People’s Day of Action on 2 March, 1981 – new photographs of which were featured in a recent exhibition. It took a long route from Fordham Park in south London, through Peckham and Camberwell, on to Blackfriars and Fleet Street, then finally through the west end to Hyde Park.

Official estimates put the turnout at around 6,000 while the organisers claimed 20,000 – these kind of disparities for demo turnouts were really common at the time. The authorities always wanted to play down attendance whereas the organisers wanted to inflate the numbers. The truth was always somewhere in between.

Tragically, to this day, the cause and motive behind the fire remains a mystery. 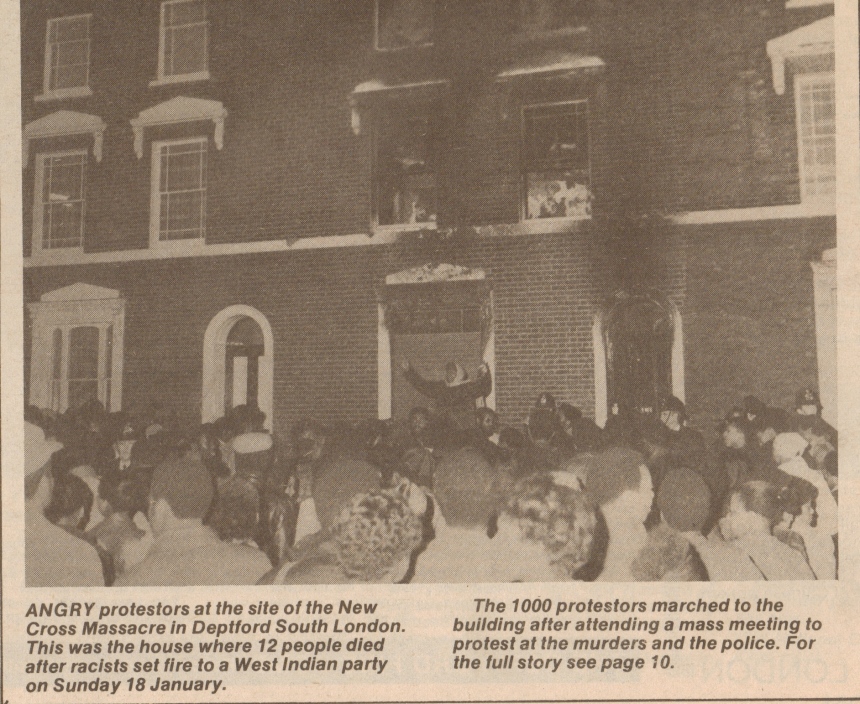 A demonstration outside the house in Deptford